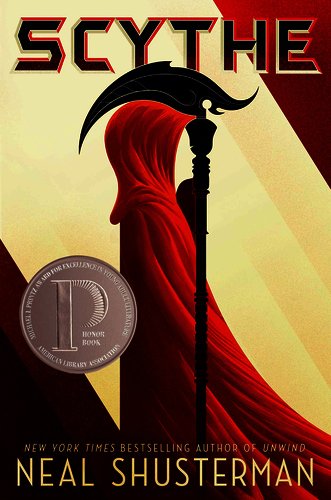 A brief review by Brianna Mastro

Scythe tells the story of the haunting duties befalling a group of individuals known as Scythes, tasked with periodically cleansing the world, one gleaning (death) at a time. Scythes, both feared and awed, live in a post-modern society where technology has solved all problems and conquered death, but population control, the scythes’ obligation, is necessary to maintain the society. The intricacies of the scythes’ everyday lives are revealed to the reader through two young characters selected to become scythes and train by the sides of admirable though controversial scythes.

The intriguing story takes a turn when a group of scythes use their power and influence to satisfy their corrupt interests and it’s up to the rest of the scythes, the two new scythes in particular, to decide what the fate of the organization of scythes will become. This gripping book is a fantastic tale that makes for a quick and adventurous read but deals with the relevant underlying themes of power and corruption in our own society.